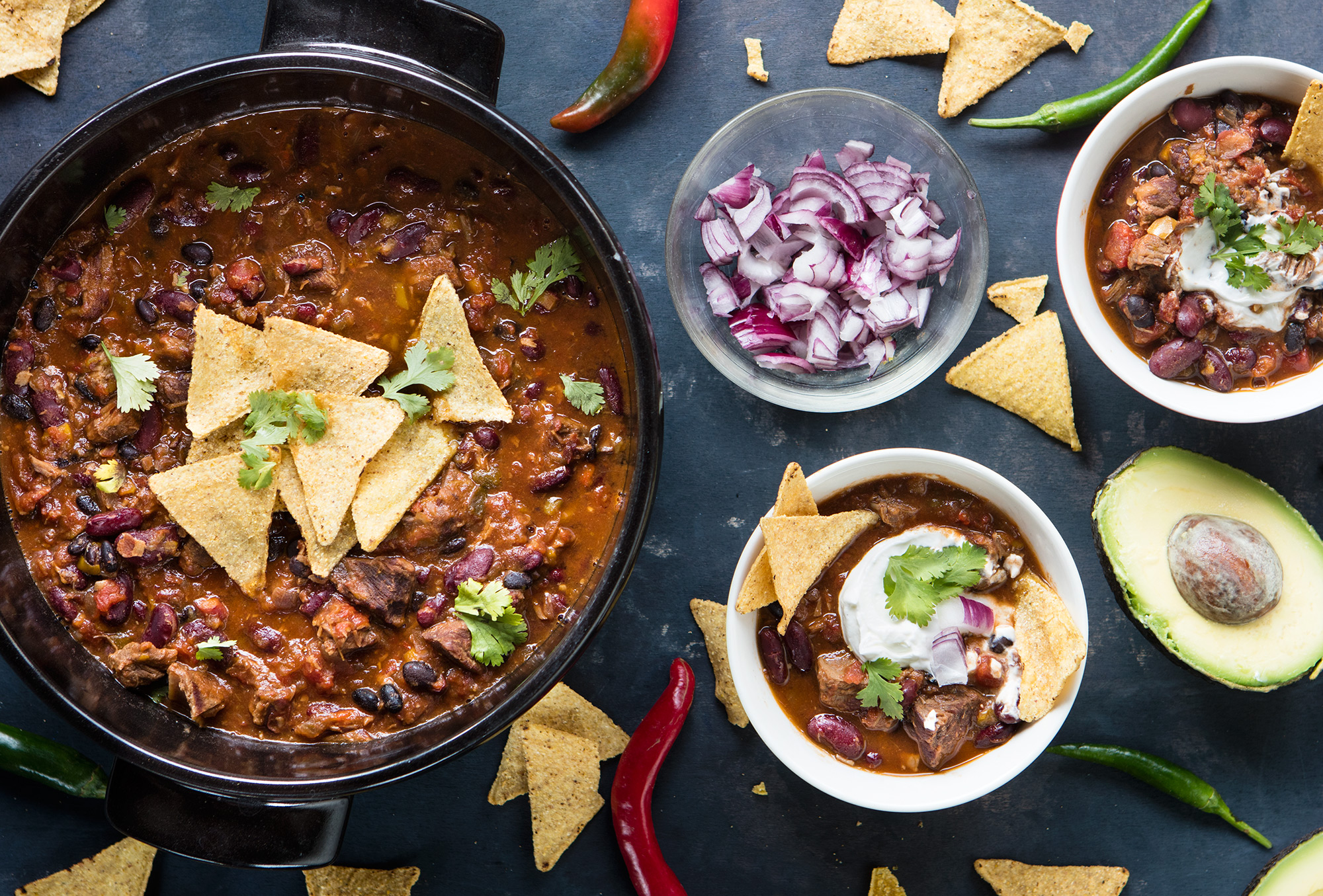 I have a problem with chili. For me, this recipe provokes a culinary identity crisis and proves I’m not a very good Texan after all.

Texans, who will jump at the chance to explain how they invented chili con carne in San Antonio in the 1800s, are extremely proud of the dish, and are frighteningly rigorous about what constitutes an acceptable recipe. Contrary to common belief, the Texas classic doesn’t include beans or tomatoes, only beef, chiles, and a few spices. The meat should be beef chuck, cut into cubes, not ground, and the cooking process should take hours to ensure tender meat and well-blended flavors.

The trouble started when the State of Texas brought chili to the World’s Fair in Chicago 1893, and soon word spread about the delicious dish. Imitation recipes began to pop up everywhere, eventually becoming more famous than the original. Today’s most popular chili recipes include beans, tomatoes, and hamburger meat which cooks in a fraction of the time. You can imagine how Texans feel about all that.

The problem is, I like beans in my chili, and tomatoes too. I’m a 7th generation Texan, so perhaps I should shamelessly defend the original recipe, but I like my version more. When it comes to the meat, however, I have to agree with my ancestors. Slow-cooking larger chunks of beef chuck until tooth-tender really makes the dish shine. Hamburger meat just doesn’t cut it.

I’m also picky about meat, I don’t buy it from the grocery store, and when possibile I try to get it directly from the producer. I like to know where it comes from, how the animals are treated, and what they ate. Of course, this is easier said than done: I’m a busy working mom and don’t have time to traipse around the country visiting cow farms every time I want a steak. For this reason, I was excited when the folks from Timanzo approached me about a collaboration. Timanzo is an e-commerce website that unites innovation and tradition by bringing producers and consumers closer together, delivering high quality meat to your doorstep.

Innovation and tradition, that eternal struggle! When done gracefully, artistic movements are launched, governments are born and culinary genius is achieved… So perhaps this recipe isn’t a complete betrayal of my roots, but instead a search for the balance of those two conflicting forces.

Maybe there is hope for me after all, for my Texanity, and for beans in chili everywhere.

Cook the bacon in heavy large pot over medium-high heat until crisp and golden. Transfer to a cutting board (do not clean pot) and chop into small pieces. Set aside.

Sauté beef chunks in the bacon fat until no longer pink, breaking up with spoon, about 8 minutes, then remove meat from pot and set aside, leaving all juices in the pot. Add onions, all bell peppers, and jalapeños to the pot with the meat juices and sauté until vegetables begin to soften, about 15 minutes. Mix in spices and a generous sprinkling of salt and pepper. Add crushed tomatoes, garlic, and beer. Stir in the seared meat, bring chili to boil, stirring occasionally. Reduce heat and simmer for about 3 hours, uncovered, or until the meat becomes very tender. Taste every hour and adjust salt and other seasonings at will. Add a few tablespoons of water if necessary to keep it from sticking. Add the beans at this point, and continue to cook for 20 minutes before serving.

Serve the chili in bowls and garnish with sour cream, chives, corn chips and slices of avocado if desired.