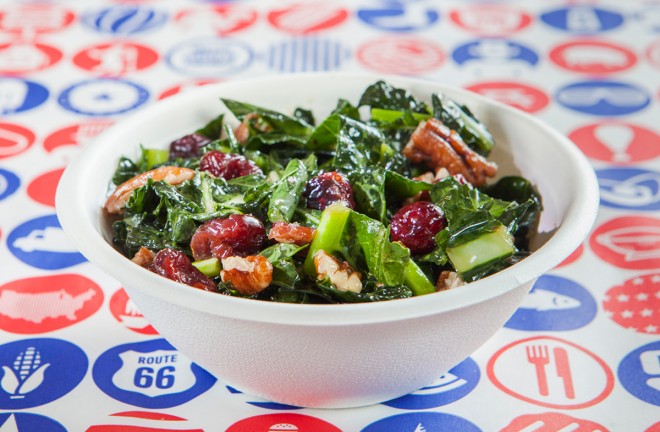 Anyone who has traveled to the United States over the last couple years has undoubtably been exposed to the overwhelming kale trend that has swept our nation. Kale chips! Kale burgers! Kale shampoo! And who could forget the ubiquitous kale salad, available in every chic, healthy lunch spot from New York to Los Angeles?

So when creating the menu for the USA Pavilion‘s Food Truck Nation at Expo (the 2015 World’s Fair), kale salad seemed like an obvious addition. I carefully crafted a recipe using toasted pecans and dried cranberries dressed with a perfectly-balanced, home-made, honey vinaigrette. Our team loved it.

One problem: the Italians involved in the project were hugely skeptical. In Italy, kale is always boiled into submission before serving in hearty winter soups or stews. The idea of eating it raw, in a salad, was shocking and unappealing to them. Until they tried it. I’ll never forget the surprised looks on their faces as they went back for seconds, and thirds. They couldn’t get enough. Mitchell Davis, the pavilion’s creative director and the vice-president of the James Beard Foundation, said it best: “The ice cream cone that became famous at the World’s Fair in 1904? In 2015, that’ll be the kale salad.”

So here it is: my official Expo 2015 Kale Salad recipe. Only time will tell if it will actually go down in history, but for me it’s already legendary.

Whisk together the oil, vinegar honey and salt to create a vinaigrette. Wash the kale and remove the hard central stem; chop leaves into thin strips. Transfer chopped kale into a large bowl and dress with the vinaigrette. Add the toasted nuts and cranberries and toss to combine. Serve chilled or at room temperature.