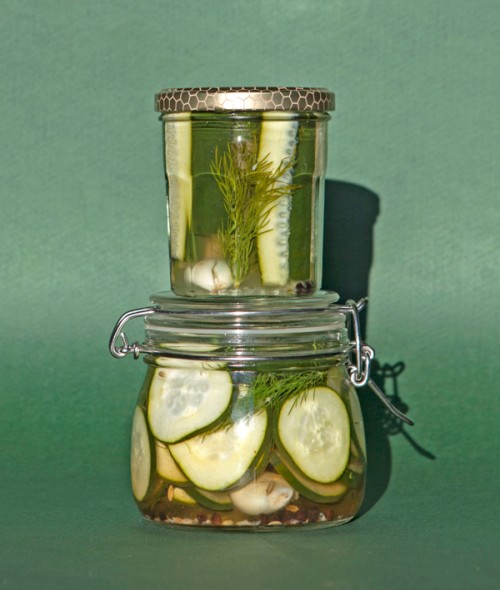 Last week was unbearably hot, too hot to stay inside, too hot to leave the house, and definitely too hot cook anything. Most days, when I opened the refrigerator to look for something to eat, I ended up leaning in to rest my head on something cold, wishing the rest of me could fit in as well. This is the perfect recipe for such dire situations. Yes, you have to boil a tiny pot of water and vinegar, but too briefly to drastically raise the temperature in your kitchen. I love pickles, so I’m almost ashamed to admit this is my first time making them. This is a quick-pickle recipe, which means you aren’t canning them for a long shelf-life; you will need to keep them in the refrigerator. I chose this method for two reasons: 1) the cucumbers remain crunchier and retain a better texture if you don’t boil the jars with them inside; and 2) I didn’t want to do anything that involved standing over a large pot of boiling water for any amount of time.

After a minimal amount of work, you will be rewarded with crisp, cool, flavorful and perfectly-salty pickles. The round slices have a crispier texture than the spears, and are great for tossing in salads or on hamburgers. While cucumbers make the most classic pickles, you can experiment with many different vegetables. I’m looking forward to making pickled okra next.

So next time an unbearable heat-wave hits, do not despair, just whip up a quick batch of pickles and let the refrigerator do the rest of the work.

Wash the jars and lids. Wash and dry the cucumbers and trim away the two ends. Cut the pickles into spears, or slice them into coins, as preferred.

Combine the vinegar, water, salt and sugar in a pan over high heat. Bring to a rolling boil, then remove from heat and set aside.

Divide the garlic, dill seed, peppercorns and red pepper flakes (if using) between the pint jars. Pack the pickles into the jars, leaving about 1/2 inch of space at the top of the jar. Pack them in as tightly as you can without smashing the cucumbers.

Pour the brine in the jars until it just covers the pickles. Gently tap the jars against the counter a few times to remove all the air bubbles. Top off with more pickling brine if necessary. You may not use all the brine.

Let the jars cool to room temperature, then transfer to the refrigerator. These just get better with time, so try to wait 2 days before opening them. Your pickles will keep in the refrigerator for 2-3 weeks.