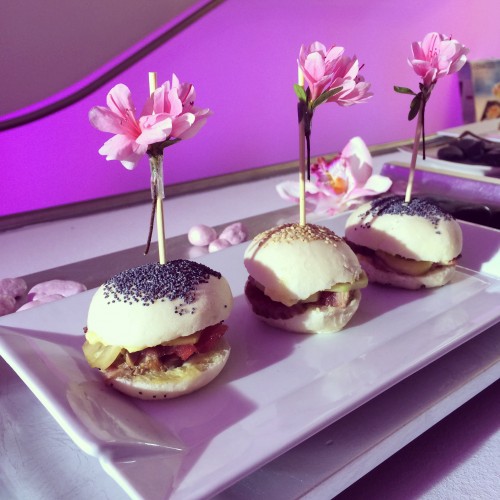 I love tuna. It’s a shame, because I rarely eat it. I’m guilt-ridden over the poor sustainability and ecological impact of many types of tuna fishing, and equally distressed over the high mercury levels often found in the fish. So, tragically, I rarely buy it, unless I have a very good excuse.

The excuse, this time, presented itself elegantly, when I was invited to the Fornarina showroom for the launch of their new Japanese-inspired sandal, the Yuki. I was summoned for a special fashion shoot; the cast and crew entirely comprised of bloggers. The models were Erika from My Free Choice, Veronica of The Fashion Fruit, and Chiara Nasti. The geisha-inspired make-up was expertly applied by Nicole of Kiss & Make Up, and the photography by Nicoletta Reggio from Scent of Obsession. A culinary interlude was provided by… can you guess?

In keeping with the Japanese mood of the day, my mission was to create my own, “American” version of sushi during the photo shoot. I couldn’t resist the temptation to create a mini burger with seared tuna, a wasabi mayonnaise, and marinated cucumbers. Fortunately not all tuna is created equal, and there are some less-sinful varieties available (check with Seafood Watch for more info). Lisa from Ecocucina also enlightened me that Atlantic Bonito is a delicious, sustainable alternative to tonno rosso, and I’m looking forward to experimenting with it in this and future recipes.

Below you’ll find a few backstage pics and videos from my day with Fornarina.

For the wasabi mayonnaise

Marinate the tuna: stir together the 1 tbsp of sesame oil, 1 tbsp of soy sauce and 2 tbsp of rice vinegar in a shallow dish. Add tuna, turn to coat, and let rest in refrigerator for 30 min, flipping the fish after 15 minutes.

Marinate the cucumbers: combine the scallions and cucumber slices in a shallow dish and sprinkle with 1 tbsp of rice vinegar and a pinch of salt. Stir to combine; set aside.

Prepare the wasabi mayonnaise: Stir together the wasabi powder and rice vinegar to form a smooth paste, adding a few drops of water if necessary. Add the mayonnaise and stir well.

Sear the tuna: Heat a tablespoon of olive oil in a heavy frying pan over a high flame until very hot. Remove the tuna from the marinade, shaking off excess. Sear the tuna in the hot pan, for 30 seconds per side, then transfer to a cold plate. (Cooking times will vary according to thickness of the steak or fillet. Be careful not to overcook the tuna, the center should be very rare). Let cool before thinly slicing with a sharp knife.

Assemble sandwiches: Cut the buns in half, and warm in an oven. Strain the cucumber mixture, discard marinade. Spread the wasabi mayonnaise on both halves of the bun. Assemble the sandwich in the following order: bottom half of roll, mayo, a few slices of tuna, cucumber slices, a couple pieces of diced scallions, mayo, top of roll. Serve immediately.