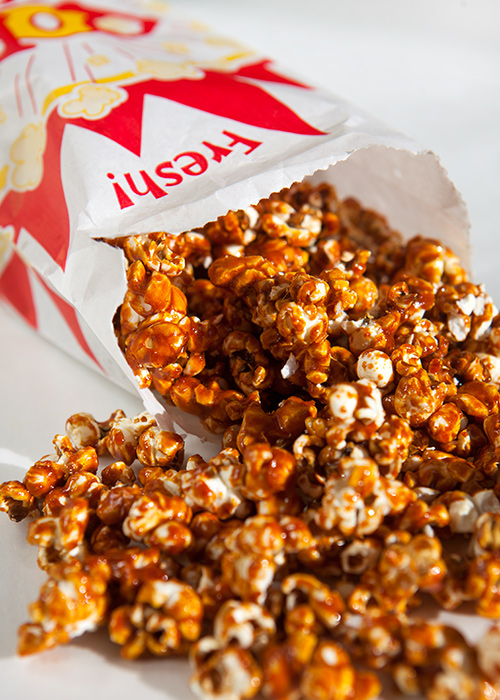 One of my first jobs was selling popcorn out of a little stand at a music festival in Texas. Being the only free food at my disposal during a week of camping and concerts, I literally survived off the stuff – to the point of nausea. I couldn’t even look at popcorn for a year afterwards. Well, that year of abstinence has long past, and this spicy-sweet recipe has me craving a truck-load of it!
Caramel popcorn is a popular American street food… Wait, did somebody say STREET FOOD? Please excuse this recent obsession… but I’m pretty excited about my new television project Street Food Heroes. Be sure to tune in for the first episode of Street Food Heroes this Sunday at 10:15 pm on Mediaset Italia 2! Check out the fan page here. If you’re in Milan come watch the first episode with us at Rookies (the new super-cool sports bar in viale Gorizia 30), we’ll be there from 10pm on!

In a large pot with a lid, heat the oil over medium-high heat. Add the popcorn kernels, cover and keep the saucepan moving until all of the kernels have popped, about 5-7 minutes. Transfer to the prepared bowl, removing any unpopped kernels. Toss with salted peanuts, if using.

In a medium saucepan, combine the sugar, honey, butter and salt. Cook over high heat, without stirring, until the mixture becomes a light golden-yellow caramel, about 10-14 minutes. Remove from the heat and carefully whisk in the cayenne pepper, cinnamon and baking soda (careful, the mixture will bubble up).

Immediately pour half the caramel mixture over the popcorn and mix well, then pour over the remaining half and toss the caramel and popcorn together, until all the kernels are well coated.

Spread the popcorn onto the baking sheets and quickly separate them into small pieces while still warm. Cool to room temperature, about 15 minutes. Once cool, store in an airtight container for up to two weeks.