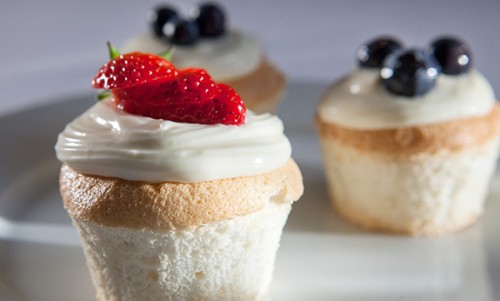 Here is a fantastic recipe for the cupcake version of one of my favorite cakes from my most recent cookbook, American Bakery. Oddly enough for an American dessert, Angel food contains no fat and is feather-light with an airy, ethereal texture. I paired it here with a cream cheese icing, but I think it would be even better topped with slightly sweetened, freshly-whipped cream.

In a food processor spin sugar about 2 minutes until it is superfine. Sift half of the sugar with the salt the cake flour, setting the remaining sugar aside.

In a large bowl, (or KitchenAid with whisk attachment) combine egg whites, cream of tartar and salt. Beat for 2-3 minutes, then add the remaining sugar, one tablespoon at a time. Once you have achieved stiff (but not dry) peaks, add the lemon juice, and almond and vanilla extracts.

Slowly add the flour and sugar mixture, letting it fall directly from the sifter on to the top of the foam. Using a spatula fold in gently. Continue until all of the flour mixture is incorporated.

Spoon into prepared muffin tins (fill almost to the top) and bake for 15-18 minutes, or until a toothpick inserted into the center of a cupcake comes out clean.