First of all, this is NOT an American recipe. I wanted to clarify that immediately because the pavlova has enough polemics concerning its origin without me confusing things. Australia and New Zealand don’t need any new contenders in their battle over which country invented this delicacy. While everyone agrees that the dessert was named for and created in honor of Russian ballerina Anna Pavlova who toured to both New Zealand and Australia in the late 20s, which country can lay claim to the recipe is root of a contentious debate. Australians insist it was created in 1935 by chef Bert Sachse at Perth’s Esplanade Hotel, though the Oxford English Dictionary recently attributed the first written recipe to New Zealand, which has also long claimed the credit. New Zealand’s prime minister John Key was even quoted as saying, “It’s totally ridiculous for Australians to claim that they have pavlova… or any of those iconic New Zealand items. Everyone knows that they’re ours and for Australia to claim ownership of them is quite inappropriate.”

I completely understand the debate, because this dessert is definitely worth fighting over. A pillowy meringue base with a crunchy exterior and soft, marshmallow-like center is topped with freshly whipped cream and fruit. Watch out Aussies and Kiwis, because whatever the origins, I have made the pavlova mine and I intend to keep it close. 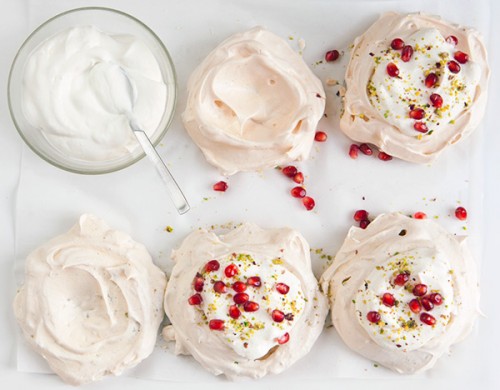 Preheat the oven to 300°F/150ºC and place rack in center of oven. Line two baking sheets with parchment paper and draw 4 circles with a diameter of about 4 inches (10 cm) on each sheet, using a large glass or small bowl as your guide. Turn the parchment paper over so the circles are on the reverse side.

Beat the egg whites with the salt until they hold soft peaks, using a stand mixer with a whisk attachment or hand beaters. Add the sugar, one tablespoon at a time, whisking well after each addition to make sure it is fully incorporated. Continue to beat on high speed until the meringue holds very stiff and shiny peaks. The meringue should feel smooth between your fingers; if it feels grainy the sugar has not fully dissolved, so continue beating until it feels smooth. Beat in the vanilla extract.

Add the 1 oz of chopped pistachios. Sprinkle the vinegar and cornstarch on top and gently fold to combine. Spread the meringue inside the circles drawn on the parchment paper, spreading and smoothing the edges, making a small indention in the center of each using the back of a spoon.

Place in the preheated oven and bake undisturbed for 30 minutes. Turn the oven off without opening the door and leave them in for another 30 minutes, then remove from oven to cook completely.

To assemble: Whip the cream with the sugar into soft peaks. Mound a spoonful of whipped cream in the center of each meringue and garnish with chopped pistachios and pomegranate seeds. Serve immediately.