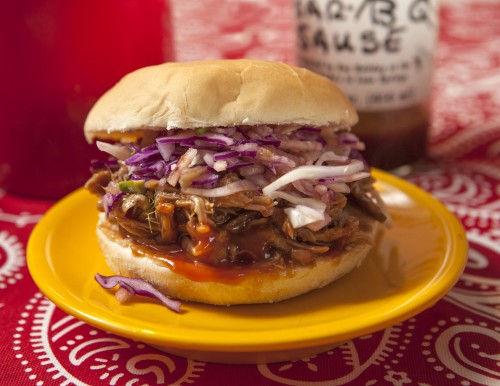 I did not grow up eating pulled pork. It’s a famous BBQ staple in the deep south, but Texans generally prefer to barbecue beef. Tennessee and the Carolinas, however, are famous for knowing to do with big pieces of pig. Of course, North and South Carolina stubbornly differ over the exact technique, and the Eastern and Western regions of both states disagree over the perfect sauce to accompany the meat, but the basic idea is the same: slowly cook a large piece of pig over a long period of time until it becomes tender enough to pull apart with a fork, then dress with a vinegar-based sauce and pile on a bun with crunchy coleslaw.

This won’t be a completely exotic recipe for my Italian readers; it’s not a far cry from porchetta, which is often referred to as “Italian pulled pork” in the States. The best pulled pork is made in a BBQ pit and smoked for 8-12 hours, but I cheated. The following recipe recreates the dish using a home oven in just under 5 hours. I’ve included the recipe for a vinegar-based sauce, but your can also just add vinegar to a store-bought BBQ sauce if you’re in a rush. Serve on hamburger buns with coleslaw and bite into an irresistible southern tradition. 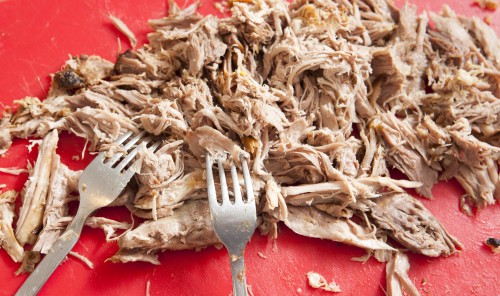 When ready to cook, preheat the oven to 300°F (150°C), static heat. Place the pork in a roasting pan, fat side up, and bake for 5-6 hours, or until it begins to fall apart easily and a meat thermometer reads 170°F (75°C) when inserted in the thickest part of the meat (without touching the bone).

Remove from oven and tent with tin foil, allow meat to rest for at least 30 minutes. With two forks, pull the meat into shreds, discarding the fat. Dress the shredded meat with a vinegar-based BBQ sauce (see recipe, below), and serve on a warm bun with coleslaw.

Combine all the ingredients in a medium saucepan. Bring to a boil, stirring often, then simmer for 5 minutes.