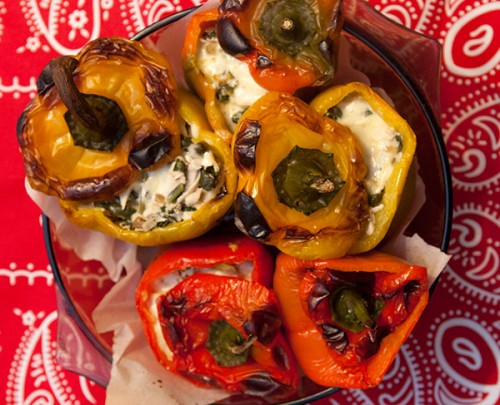 Something I didn’t know about pregnancy, something people forget to mention when waxing poetic about the joys of impending motherhood, is that among all those other delightful symptoms expectant mothers endure, we also tend to get stupid.

Did I forget to mention something? I haven’t officially broken the news here on the blog, though a lot of you have noticed something different about me from photos on facebook. And no, fortunately that belly has nothing to do with overindulging on desserts from my new cookbook… I am nine months pregnant and expecting a baby girl in December. My husband and I are overjoyed, nervous, excited, terrified, ecstatic, and feeling all sorts of overwhelming emotions that first-time parents are expected to experience.

Which brings me back to my current state of mind, or lack thereof. It’s a highly disputed medical fact, with contradictory scientific studies and adamant believers on both sides of the argument, that a woman’s brain shrinks by up to 10% while expecting. No wonder. At least, I hope that’s what’s causing this complete lack of memory, wit and cognitive skills. I pray it’s a temporary brain shrink, and not some sort of permanent shift in my personality as my body and mind prepare to dedicate themselves fully to my new “sole purpose in life”: being a baby mama.

“But wait, brain! Don’t go!” I cry out, desperately. “I have a career to manage, a household to run, a blog to update and books to write! You can’t just check out on me now!”

My brain responds with an eerie silence, followed by something like “I wonder if she’ll have blue eyes.”

But I digress… I came here to talk about something else… Oh yes! Food. I was going to tell you about these peppers. I love stuffing peppers. They make for a colorful and flavorful meal and you can fill them with practically anything, so it’s a great recipe for transforming leftovers into a new and delicious dish. I often make them with a spicy lentil, tomato and ground beef filling, or black beans with veggies and cheese, the variations are limitless. The trick is to briefly boil the peppers first, in order to soften them up and bring out their sweet flavor before stuffing and tossing them in the oven.

Just remember to set your timer and take them OUT of the oven before you burn them beyond recognition, which has been happening to me a little too often lately…

Cut off the tops of the peppers, discard seeds but reserve tops. Remove seeds and white membranes from inside of peppers.

Toss the peppers and tops in a pot of boiling, salted water and cook for 8-10 minutes. Drain peppers and let cool while you prepare the stuffing.

Heat a spoonful of olive oil in a large frying pan and cook the onions until soft, about 5 minutes. Add the chopped chard, cayenne pepper and salt, and sauté until well cooked, about 10 min. Drain any remaining liquid and let cool slightly.

Mix together the chicken, cheese and cooked chard then use this mixture to stuff the peppers. Stand the peppers upright in a round baking dish. Place the pepper tops on a separate baking sheet lined with parchment paper.

Bake the peppers and their tops at 400°F/200°C until nicely browned on top and the filling begins to bubble, about 30 minutes. Let cool slightly before covering each pepper with its top and serving.