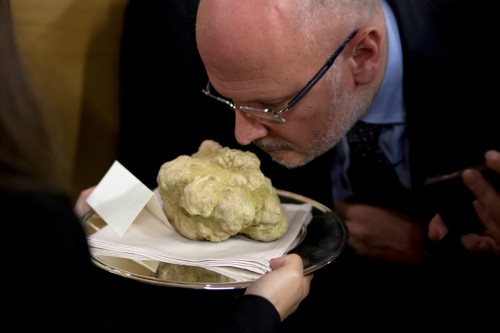 Now that the craziness of Thanksgiving is over, I can finally tell you about my adventure 2 weekends ago in Piedmont. I had the immense honor of being invited to witness the Asta Mondiale del Tartufo Bianco d’Alba (The White Truffle of Alba International Auction) at the striking Castello di Grinzane Cavour in the scenic hills outside of Alba. The pungent truffles from this area are the rarest and most coveted of them all, and each October the quaint town of Alba transforms into the bustling center of the gastronomic universe when it hosts the white truffle world market.

How much money? Well, during the one-hour International Auction, I witnessed 227,200 euro fly around the room faster than you can say “Asta Mondiale del Tartufo Bianco d’Alba.”  The auction room was packed with journalists, gourmands, philanthropists, and celebrities. I was especially excited to meet Jonathan Benno, the american chef renowned for his “new modern italian” cuisine at the Lincoln Center in New York. He flew in for the weekend to receive the title of “White Truffle Ambassador 2011.”

I was afraid to scratch my nose for fear someone would think I was bidding; a mere raise of the hand meant committing thousands of euros in a split second. The final bid for a truffle weighing 1,253 grams (2.76 lbs) was 98,000 euros. The good news is that this was a benefit auction, and all that money goes to charity.

It was an electrifying and exciting experience, and I’m happy to have had the chance to participate… even if I didn’t bring home any diamonds for my kitchen.