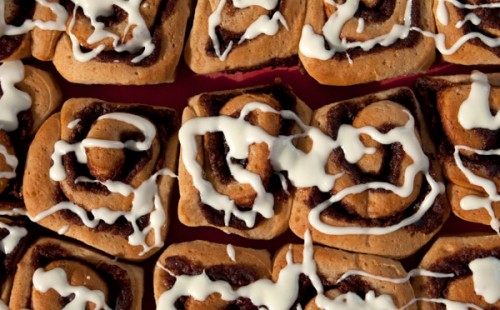 I had an overwhelming number of requests for this recipe after posting a picture of cinnamon rolls in last week’s “Texas Highlights” post.  In the US, cinnamon rolls are a popular breakfast or brunch treat and can be found in most self-respecting bakeries; in fact I photographed those particular rolls in a rustic bakery in the tiny West Texas town where my brother lives. They tasted even better than they looked, and I’m still trying to figure out what drug was in them causing me, weeks later, to still crave THOSE and NO OTHER cinnamon rolls.

I’ve been meaning to try my hand at cinnamon rolls for a long time, but somehow always end up making something else when I have time to bake. This is my first attempt at the recipe and while they are drop-dead delicious, I have to admit they’re not quite as addictive as the rolls from West Texas. I assure you this recipe is flawless: the fluffy, yeasty dough is interwoven with a decadent cinnamon swirl and garnished with a sweet cream cheese glaze… but there’s just something missing, some secret irresistible ingredient like dry desert air, Texas sunsets or Southern hospitality. Whatever the case, I am happy to use this recipe as a substitute until I can make it back out to Texas and find out the truth about those mysterious desert rolls. 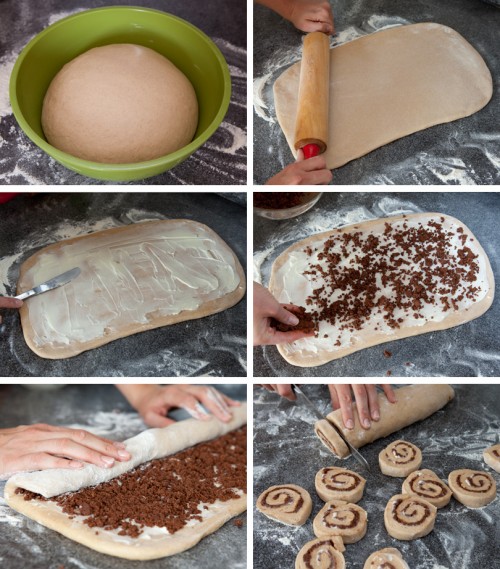 For dough:
Heat milk and butter together until milk is hot but not scalding, and the butter is just melted, 120°F to 130°F. Pour into bowl of stand mixer fitted with paddle attachment. Add 1 cup flour, sugar, cinnamon, egg, yeast, and salt. Beat on low for about 3 minutes, stopping occasionally to scrape down sides of bowl. Add 2 1/2 cups flour. Beat on low until flour is absorbed and dough is sticky, scraping down sides of bowl. If dough is very sticky, add more flour by tablespoonfuls until dough begins to form ball and pulls away from sides of bowl. Turn dough out onto lightly floured work surface. Knead until smooth and elastic, adding more flour if sticky, about 8 minutes. Form into ball.

For filling:
Mix brown sugar and cinnamon in medium bowl.
Punch down dough. Transfer to floured work surface. Roll out to 15×11-inch rectangle. Spread butter over dough, leaving 1/2-inch border. Sprinkle cinnamon sugar evenly over butter. Starting at 1 long side, roll dough into log, pinching gently to keep it rolled up. With seam side down, cut dough crosswise with thin sharp knife into 18 equal slices (each about 1/2 to 3/4 inch wide).
Spray two 9-inch square glass baking dishes with nonstick spray. Divide rolls between baking dishes, arranging cut side up (there will be almost no space between rolls). Cover baking dishes with plastic wrap, then kitchen towel. Let dough rise in warm draft-free area until almost doubled in volume, 40 to 45 minutes.
Position rack in center of oven and preheat to 375°F. Bake rolls until tops are golden, about 20 minutes. Remove from oven and invert immediately onto rack. Cool 10 minutes. Turn rolls right side up.