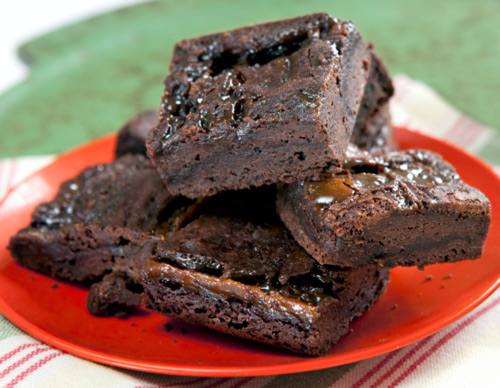 Before last Friday, I was pretty sure my brownies were the best in town. Not because I have delusions of culinary grandeur, but because brownies are still a novelty in Italy, and tend to receive standing-ovations wherever they go. It’s easy to get a big head about all that applause and start to think: Yes, maybe I DO make the best brownies in the WORLD!

That was all before my American friend Brian came over for dinner and brought along a pan of salted caramel brownies that just about blew my mind: sweet, gooey, chocolaty, rich, moist, and with a swirl of slightly salted, soft and sticky caramel on top… I couldn’t believe my taste buds. My ego was shaken, but not my appetite. I had to freeze the leftovers to avoid eating them all for breakfast (this didn’t stop me from thawing them out several hours later to take to a dinner party that night).

I keep imagining one of my brownies and one of Brian’s meeting on an abandoned street of Milan. They swap a few inflammatory phrases like “Hey Old Timer, this town ain’t big enough for the two of us,” and “Well, well, looks like we got ourselves a fancy-lookin’ city brownie.” Then, cocking their revolvers, they duel it out to the end. When the smoke clears, my old trusty brownie lies defeated and dying in a pool of melted butter, while the slick, sexy, salted caramel brownie saunters over in triumph to survey the pitiful scene. My brownie’s last, pained words are “I… think… I’ve… met… my… match…”

Brian was wise enough to give me the recipe (could it have been the crazed Clint Eastwood look in my eyes?), so I’m going suppress my inner-Texan and quell my urge to challenge him to a duel. I suppose Milan really is big enough for the two of us, and there can never be too many brownies in the world. So, I’m laying down my guns and declaring Brian an honorary “Americano in Cucina.” Thanks for the recipe Brian!

1. Adjust an oven rack to the lower-middle position and heat the oven to 350°F / 180°C. Grease an 8-inch square baking pan. Line the pan with overlapping pieces of foil and grease the foil.

2. In a medium heatproof bowl set over a pan of almost-simmering water, melt the chocolates and butter, stirring occasionally until smooth. (Or, melt in the microwave on 50% power for 30-second increments, stirring after each, until melted and smooth.) Whisk in the cocoa until smooth. Set aside to cool.

3. Whisk together the eggs, sugar, vanilla, and salt in a medium bowl until combined. Whisk the warm chocolate mixture into the egg mixture; then stir in the flour until just combined. Pour about half of the brownie mixture into the prepared pan and spread into the corners. Spoon 9 dollops of Salted Caramel Sauce on top of the brownie batter. Top with the remaining brownie mixture, spread into the corners and level the surface with a spatula. Again, spoon 9 dollops of the Salted Caramel Sauce on top of the brownie batter. With a dull butter knife, gently run it through the batter to swirl the batter just a bit (don’t do it too much or it will all mix together). Sprinkle a bit of sea salt on top.

4. Bake until slightly puffed and a toothpick inserted in the center comes out with a small amount of sticky crumbs, 35 to 40 minutes. Cool on a wire rack to room temperature, about 2 hours. Remove the brownies from the pan using the foil handles and transfer to a cutting board. Cut into squares. Brownies can be stored in an airtight container at room temperature.

In a large, heavy saucepan, heat the sugar over medium-high heat, whisking as the sugar begins to melt. Some of the sugar will harden into clumps, but it will melt eventually –  just keep whisking. Continue to cook the sugar until it reaches a dark amber color. Whisk in the salt, and then add the butter all at once and whisk until it is completely incorporated into the sugar. Remove the pan from the heat and pour in the heavy cream (it will foam up when first added). Continue to whisk until it forms a smooth sauce.

Allow to cool for 10-15 minutes before using in the brownies.