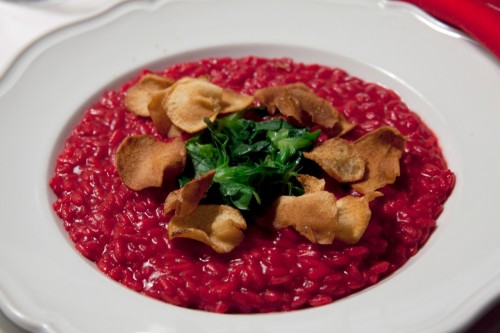 I’m on a risotto kick lately, so I’ll share another recent discovery that’s as pretty as it is delicious. Along with the Costardi brothers’ Risotto al pomodoro, this was the other dish that really impressed me at Identia’ Golose this year. Chef Cesare Battisti‘s creation is a whimsically colorful combination of flavors and textures, and makes for a show-stopping dinner party dish.

Rinse the beet and simmer in lightly salted water for 2 hours or until soft. Alternatively, the beet can also be steam-cooked until soft. Drain and let cool slightly. Peel the beet and cut into large chunks, then purée into a paste in a food processor or blender, adding a couple tablespoons of vegetable broth if necessary. Salt to taste and set aside.

Fill a large skillet or wok with at least 3 inches of vegetable oil and heat until a toothpick sizzles when inserted into the oil. Fry the Jerusalem artichoke slices in several batches (don’t crowd them) until golden brown. Drain on a wire rack or paper towels and salt immediately. Set aside, and try to avoid eating them all before dinner.

Lightly steam the watercress until barely wilted. Cover to keep warm and set aside.

Bring vegetable broth to a simmer in a small pot. With a couple toothpicks, skewer one half of the onion to keep it intact during the cooking process (you’ll remove it at the end), then cut off the ends of the toothpicks that stick out. Reserve other half for a different use. Heat a couple tablespoons of olive oil in a wide stainless steal or heavy aluminum pot over medium-low heat and add the half onion. Stir for several minutes to distribute the flavor, but do not allow the onion to turn brown. Add the rice and toast, stirring constantly for several minutes, or until the rice becomes shiny.

Add a ladleful of vegetable broth and a teaspoon of salt and stir constantly until absorbed. Continue to add broth, a couple of ladlefuls at a time, stirring constantly, for about 7 minutes. Stir in the beet purée and continue to cook, stirring constantly. If the rice becomes too dry and begins to stick, add another ladleful of broth. Depending on the rice, the total cooking time should be between 15-20 minutes. You want the rice to be al dente, and it should have enough liquid to make “waves” if you shake the pot. Remove from the heat and discard the onion, then stir in the parmesan cheese. Add the cold butter, but do not stir. Instead, grab one handle of the pot (with a pot holder!) and shake back and forth (pushing the pot away from you, then pulling it back toward you quickly) for a couple minutes, making “waves” in the risotto to distribute and melt the butter. Taste and adjust the salt as needed. Cover the risotto with the pot lid and call everyone to the table.

To serve, spoon the risotto into individual plates, arrange the watercress in the middle, surrounded by Jerusalem artichoke chips.