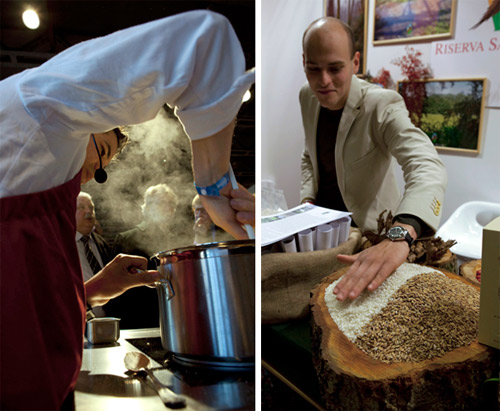 This year marked my first edition of Identità Golose, the international chef’s congress started in Milan (though there is now a New York and London edition as well). It is exclusively open to people that work in the food industry and some criticize it as being somewhat elitist. I found it to be exciting, inspiring, and completely overwhelming. It seemed like very famous or emerging chef in Italy (and much of the world) was there to share and exchange philosophies, tricks, and tools of the trade. Obviously, not being a professional chef, I felt somewhat out of my element. Paolo Marchi (the organizer of Identità Golose) however, is a proficient blogger and has demonstrated notable interest in bringing food-bloggers into the expo, both as spectators and presenters. I had the pleasure of running into some of my fellow “bloggies” (listed below) and swapping notes on the event. Several of us presented chefs during “Un Risotto per Milano,” where I had the pleasure of sharing the stage with Stefano Deidda, an inspiring and dedicated Sardinian chef who shocked me by having my same age but a resume’ that read like he was 60 years old. I especially enjoyed the last day’s program “Identita’ di Riso”, where I followed several risotto lessons that I hope to even somewhat successfully duplicate here in the next weeks.

A big thanks to Paolo Marchi and the rest of the folks at Identità Golose for inviting me to join in the congress this year.