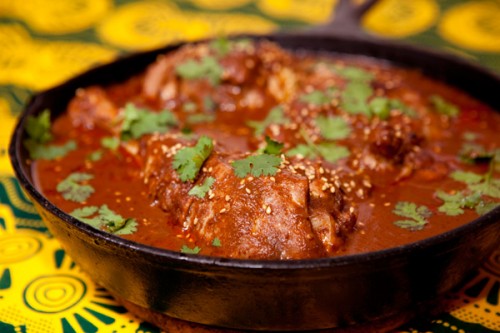 I’ve been on a Tex-Mex craze lately. Maybe it’s because I didn’t make it back to Texas this summer and I’m craving some of the local fare, so I’ve been making dishes that I don’t usually recreate over here. The problem with making Tex Mex in Italy is the lack of proper ingredients, especially certain flavorful peppers that can make or break a recipe.

Mole Poblano is a rich and complex sauce, traditionally containing chocolate, hard-to-find-chiles, nuts, and over 30 other ingredients, and requiring hours of hand-grinding and patient stirring. I was craving mole the other night and was discouraged to find I had only half of the required ingredients. As usual, however, I didn’t let that stop me.

I was inspired by David Lebovitz, who lives in Paris and describes a similar experience in his book “The Sweet Life in Paris”

For any of those “If-it-doesn’t-take-ten-hours-to-make-it’s-not-mole” folks out there, give me a break since some of the items aren’t available in Paris. I’m doing the best I can with what I’ve got. Because of that, this recipe has about sixty-seven fewer ingredients than the normal recipe and takes a fraction of the time to put together. But it tastes just like the real thing. So if you’re the mole police, please put away your handcuffs.

I too decided to ignore the mole police, and so plowed through the traditional recipe, substituting whatever I could and eliminating the rest. The results were a quick, flavorful, anything-but-disappointing meal that brought me right back to Texas, no poblano chiles or hand-grinding required.

If using dried chiles, soak them in hot water until softened, about 15-30 minutes. Drain and dice the chiles.

Put raisins and chocolate in a blender and cover with 1 cup of hot chicken broth in order to melt the chocolate and soften the raisins.

Heat some oil in a large, heavy skillet over moderately high heat and saute the onion until golden-brown. Add the garlic, diced chiles, and spices and cook, stirring, for another minute. Add the tomatoes, remaining chicken broth, sugar and salt, and simmer the sauce, uncovered, stirring occasionally, for about 20 minutes.

Add this sauce to the chocolate and raisins in the blender, along with the toasted almonds and sesame seeds, and puree until smooth. Taste and adjust seasonings to your liking.

Wipe out the skillet and heat a few tablespoons of oil. Add the chicken, skin-side down, and brown for for several minutes on each side. Pour the puréed sauce over the chicken, cover and simmer over low heat, turning the pieces once or twice until chicken is tender, about 40 minutes.

Garnish with sesame seeds and cilantro if desired, and serve with rice or cornbread.