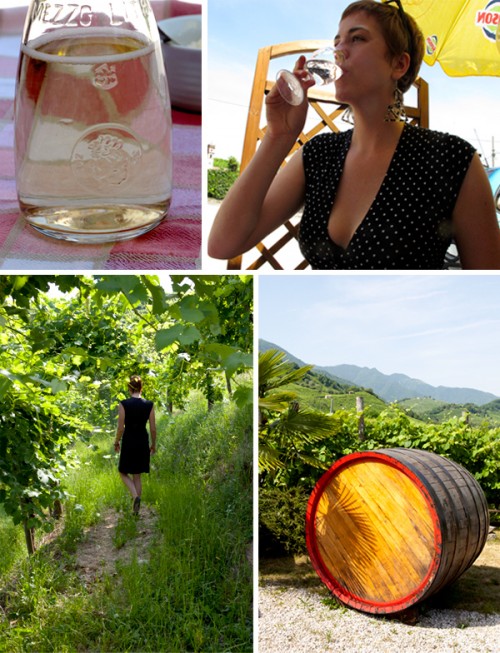 Emilio (the Italian husband) loves to ask directions. When we’re traveling, he often stops to ask something of a local, even if he knows exactly where we’re going. Through these casual conversations we often end up in the exactly right place, but rarely where we were heading.

Case in point: Last week we were in Padova for work and decided to take a detour up through the Prosecco region on our way home. I had my map and iPhone and Tom Tom, and had improvised an efficient itinerary based on limited time and mileage. Emilio had a different idea.

At a gas station 10 km before the exit for Conegliano:

Emilio: My wife loves prosecco, we’re looking to exit the highway and visit a couple vineyards. We’ve heard that Conegliano would be a good starting point.

19 km later, 1 km from our exit. Stuck in immobile traffic on a highway bridge behind a vehicle whose engine spontaneously exploded (no one was hurt). We step out of the car to watch the plumes of black smoke and exchange pleasantries with our fellow frustrated motorists:

Local guy with thick local accent: See that soccer field underneath us? One time, a guy in a BMW skidded off the bridge, his car landed smack in the middle of that field, and he survived. A little banged up, but lived. So, what brings you folks to the area?

Emilio: We’re exiting up ahead to drive towards Valdobbiadene. My wife goes nuts for Prosecco, so we’re going to stop by some wineries.

Local guy with thick local accent: Really? Which wineries? I’m a wine rep! I don’t sell Prosecco, but I grew up here and know all the locals.

Local guy with thick local accent: Here’s what you do: Go to Guia, in the province of Valdobbiadene. Ask for Caneva da Nani di Giovanni Canello. They won’t remember me, I’m not a friend of theirs or anything, but you won’t be disappointed. They make their Prosecco in the traditional way: it ferments in the bottle, leaving a yeast residue at the bottom which you don’t drink. This is the true prosecco. By the way, here’s my brochure.

An hour later, after reaching Guia:

Emilio: Excuse me ma’am, we’re looking for the Canello estate?

Skeptical local woman with broom: Which Canello? There’s about a hundred of ’em here!

Skeptical local woman with broom: Ah. Ok, go down that road, take a left, then another left, then a right, then ask.

Emilio: Thank you ma’am. By the way, do you by chance know where we could get a bite to eat on the way?

Another hour later, after lunch at a trattoria, then finally reaching Caneva da Nani: 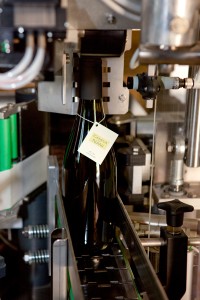 Enrico (son of Giovanni): You’ve come to the right place, and you won’t be leaving any time soon!

He was right, we stayed the entire afternoon, joking and chatting with the family, touring the winery and sipping their traditional Prosecco. He sent us home with 18 bottles at an unbeatable price after an unforgettable experience. We’ll definitely be back soon. At least, we’ll head in that direction, then turn off the Tom Tom and see what happens.