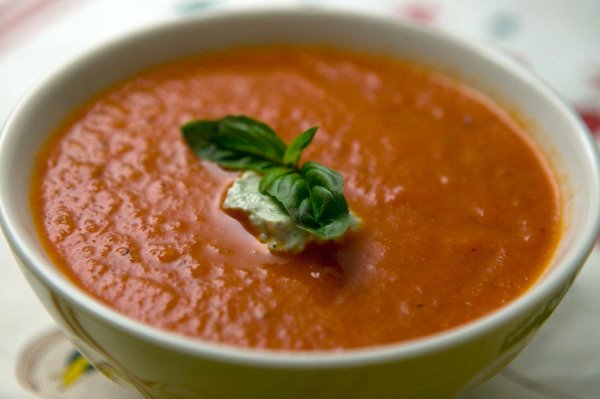 Not to toot my own horn, but I made one hell of a dinner the other night. And I have yoga to thank for it.
I was having friends over and I wanted to make something reminiscently American, though revisited. Now that I’m supposed to be some “authority” on American cuisine, folks expect to have a cross-cultural and authentic dining experience at my house. So I can’t serve pasta anymore. At least for a while.
I wanted to serve various courses… not a very American tradition, so I was shaking things up right off the bat. So I thought soup. And I thought chipotle. Chipotle is a flavor they just don’t have over here in Italy, so when used in the right dosage, it’s always a big hit and somewhat exotic. I needed a southwestern vehicle for my chipotle though, and the obvious answer was roasted peppers and tomatoes.
The firey flavor of the soup turned out to be delicious but needed to be balanced out. I found myself wishing for sour cream (another hard-to-find-in-Italy ingredient), but remembered I had a tub of Crème Fraîche in the fridge. Perfect. It sounds better than “sour cream” but it’s basically the same thing, just fattier and a bit less tangy. So I whipped it up with some mint (what’s more cooling than mint?) and had my perfect dollop.
I wanted to make a light second course, simple but not boring. “Fish Wrapped in Romaine Leaves” a Mark Bittman recipe, totally enthralled me (check out the video here, or the recipe here). The side dish needed to be downplayed, since the fish was getting a little fancy, so some pan fried potato slices brought it all back home.

So my meal was complete, but something was missing. It wasn’t quite American enough, there was nothing THAT particular about it all. So I took a break and did some yoga, something I do when I realize I’m sweating over silly things like side dishes. I was in downward dog, taking mental note of the dust under my bed, when a clear voice from deep inside me declared…      “CORNBREAD.”
That was it, corn- the most American of vegetables. Cornbread, the most comforting of comfort foods. It married the soup in a lavish yet humble ceremony and tied the whole meal together with southern grace. Hallelujah.
For dessert, personal chocolate lava cakes with raspberries and little American flag toothpicks.
Betsy Ross would have been so proud, not to mention Barbara Bush. My God, what has become of me?

1 cup Crème Fraîche or sour cream
1 handful mint leaves
First, blend up the mint leaves with the Crème Fraîche, cover and refrigerate.
Arrange peppers, tomatoes (cut side up), onion and garlic in large baking trays. Drizzle with olive oil, salt and pepper and roast at 400°F (200°C) for about 30 minutes, or until everything looks real roasted. Transfer to a soup pot with a bouillon cube, chipotle pepper, and a little water and let simmer for about 15 minutes, stirring often.
Blend soup with your preferred blending appliance, adding water to arrive at the desired consistency. Transfer back to soup pot and cover until ready to serve.
Right before serving, stir in your glug of cream or milk (this helps cut the acidic flavor of the tomatoes and creates a velvety texture.) Spoon into bowls and top with the mint cream dollop, garnish with a mint leaf and small cubes of avocado if desired.
It is absolutely obligatory to serve with cornbread.
All-Purpose Cornbread (adapted from Cook’s Illustrated recipe):
1 1/2 cups (212 g) flour
1 cup (150 g) yellow cornmeal
2 teaspoons baking powder
1/4 teaspoon baking soda
1 teaspoon salt
2 tablespoons light brown sugar
3/4 cup (100g) corn kernels (they recommended frozen kernels, thawed. I used canned and it was fine)
1 cup buttermilk (I used my faithful substitute, 1 cup milk with 1 tablespoon lemon juice set aside for 10 minutes to thicken)
2 large eggs
1 stick (110 g) unsalted butter, melted and cooled slightly
Preheat oven to 400°F (200°C). Grease 8 inch square baking dish (if you have a cast iron skillet, use it! By all means!). Whisk first 5 ingredients in a medium bowl, set aside.
In a food processor, blend brown sugar, corn kernels and buttermilk. Add eggs and blend until well combined; some corn lumps will remain.
Make well in center of dry ingredients and pour wet ingredients into well. Fold gently with rubber spatula and add melted butter. Gently and quickly fold mixture together until dry ingredients are just moistened. DO NOT OVER MIX. Mixture will remain lumpy.
Pour into prepared pan and smooth surface with spatula. Bake until deep golden brown, about 25 to 30 minutes, or until a toothpick stuck in to the center comes out clean. Let cool in pan for about 10 minutes before serving.
17 October 2008
Facebook Twitter Email